Lying 35 kilometres off the coast of Surat Thani, Ko Samui – Thailand’s second largest island after Phuket – is one of Asia’s and indeed the world’s favourite resort islands, going by the various readers’ choice awards and other international accolades bestowed upon it over the years. The most recent of these came in the Condé Nast Traveller UK magazine’s 2018 Readers’ Travel Awards announced in September, in which Samui was voted the 9th best island in the world. 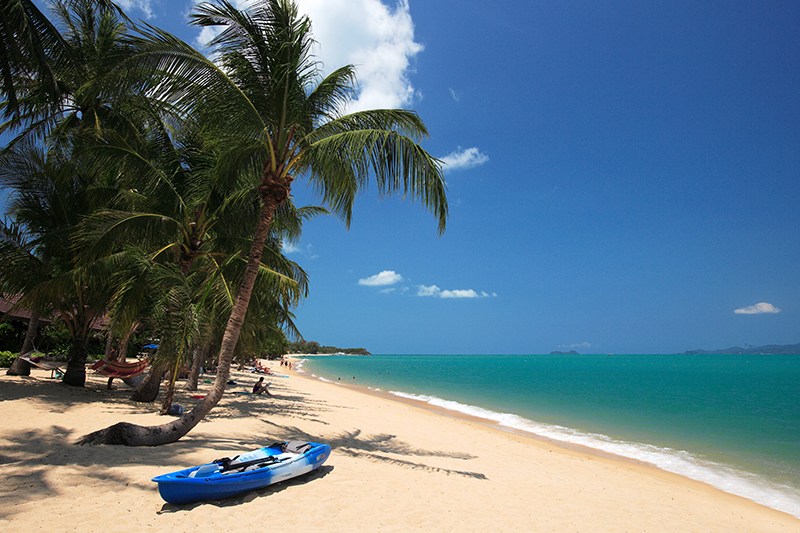 It’s hard to argue that Samui’s main draw aren’t its beaches, of which there are a number spread around the island’s coastline. The different beaches offer different vibes, from the bustling Chaweng and Lamai Beaches to the more peaceful and laidback Bophut, Mae Nam and Choeng Mon Beaches, to name some. It’s this diversity in beaches that helps give Samui a broader appeal.

And so does a choice of activities to do and sights to see around the island, should the time come for a day or two’s break from the warm, inviting sands and welcoming waters of the beach scene. For those seeking a touch of tropical adventure, there are safari tours by jeep or truck that head up into the island’s mountainous and forested interior, zipline trails that soar through jungle and park scenery, 4-wheel ATV bike trips through scenic off-road terrain and, offshore, snorkelling, island-hopping tours and sea-kayaking. 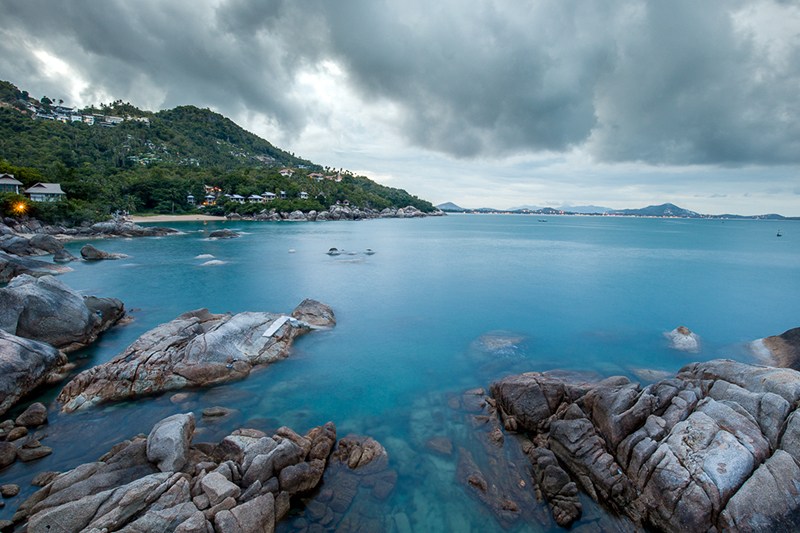 For those who appreciate great views, the jeep/truck safari tours offer just these from high up in the island’s interior. There’s also an outdoor cooking class on one tour which takes place some 615 metres above sea level to a 360 degree panoramic backdrop of Samui and the Gulf of Thailand stretching off to the horizon. Chances are the Tom Kha Kai and Som Tam dishes prepared, cooked and eaten here are among the best one ever tries.

Notable among the sights on Samui – natural and manmade – are the numerous Buddhist temples and even a couple of Chinese temples, and the Hin Lat and Na Mueang Waterfalls that are set against jungle backdrops. 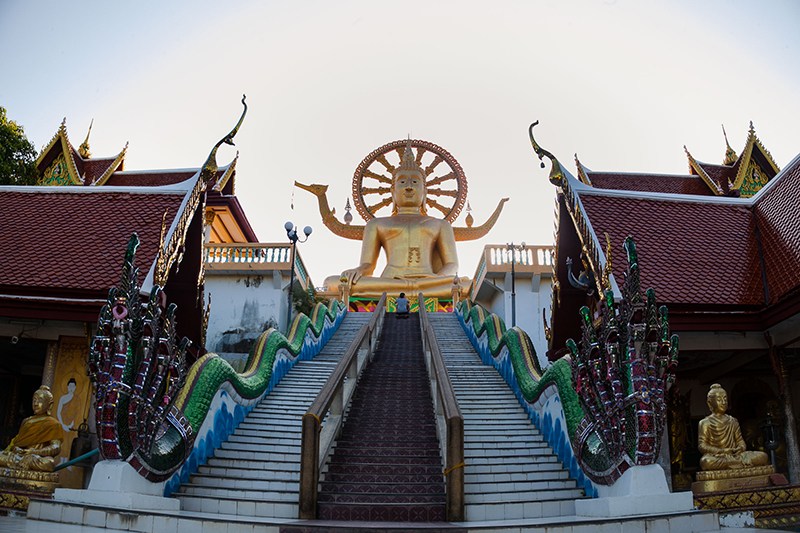 Probably the best known of all the temples is the Big Buddha temple (known locally as Wat Phra Yai) on the small rocky island of Ko Fan off Samui’s northeastern corner and which is reached by a causeway. The temple’s golden, 12-metre Buddha statue that sits in the Mara posture can be seen from several kilometres away and is a prominent local landmark, so much so the beach there is commonly referred to as Big Buddha Beach. 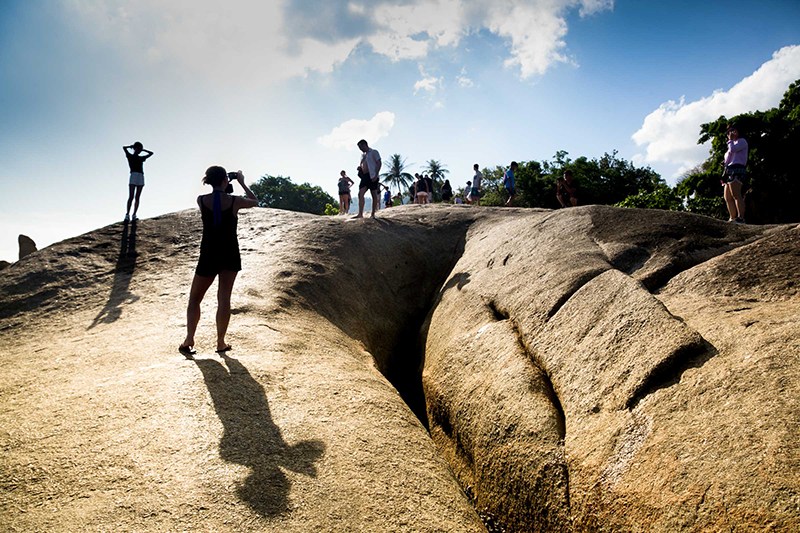 One attraction that’s been inspiring chuckles and titters among tourists for years are the Grandpa and Grandma Rocks, situated on the island’s southeastern coastline a couple of kilometres south of Lamai Beach. These two rock formations – known locally as Hin-Ta Hin-Yai – are famous for bearing a resemblance to the male and female genitalia. While the rocks amuse the tourists, they are revered by the locals who believe they can bring luck and fertility. There’s a local folklore legend attached to the rocks, which a signboard near them details. 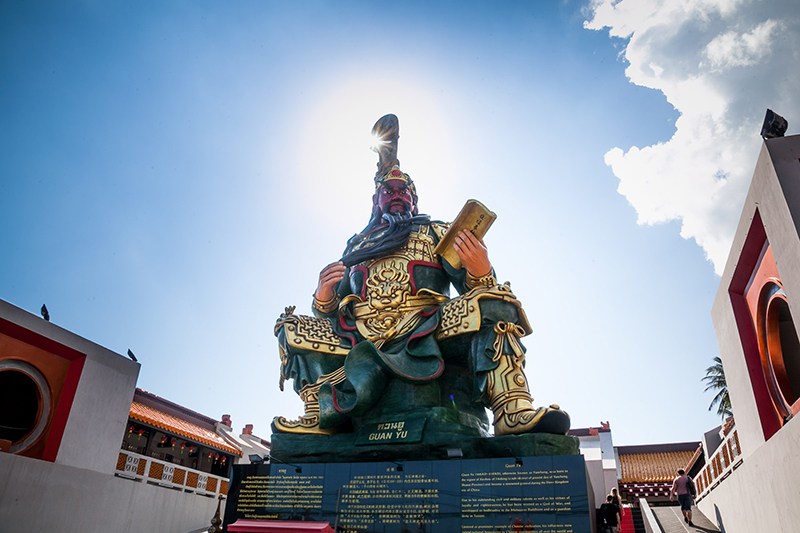 The Guan Yu statue at a Chinese temple on Ko Samui

A more unusual of sights on Samui is the Mummified Monk at Wat Khunaram, about six kilometres west of Lamai Beach. The monk Luangpho Daeng died in 1973 and his body has since been on display in a glass case, until this day showing little sign of decay except for the disintegration of the eyes which have been covered with sunglasses. Shortly before his death, he is said to have told his followers if his body was to decompose, he should be cremated but if not, then he wanted to be put on display as a visual reminder of the Buddha’s teachings. The life and death of Luangpho Daeng is, for Thais, an inspiration to follow the Buddhist precepts. 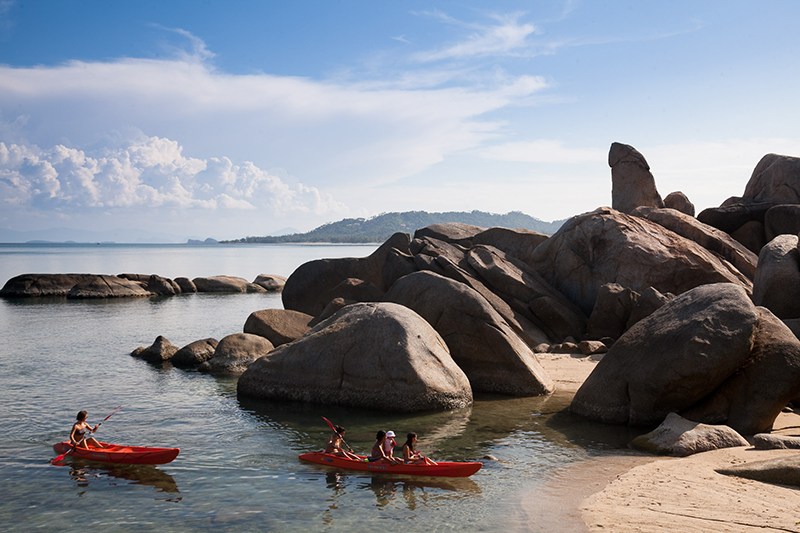 Less than a kilometre from the Grandpa and Grandma Rocks is a newer attraction called WeGreen, aimed at the green-minded and comprising of a small cultural-themed park, a veggie farm and restaurant. In the grassed park area, there are several educational stations where staff display traditional cooking practices, sweet and dessert making, a traditional children’s game and the like.

Visitors can watch and try their hand at traditional coconut peeling using a tool called the Siemand at making grated coconut with a traditional grater. They can watch the making of – and of course, taste – the delicious local sweet Kalamare, scrumptious Samui-fried noodles and local dessert Khanom Ko. 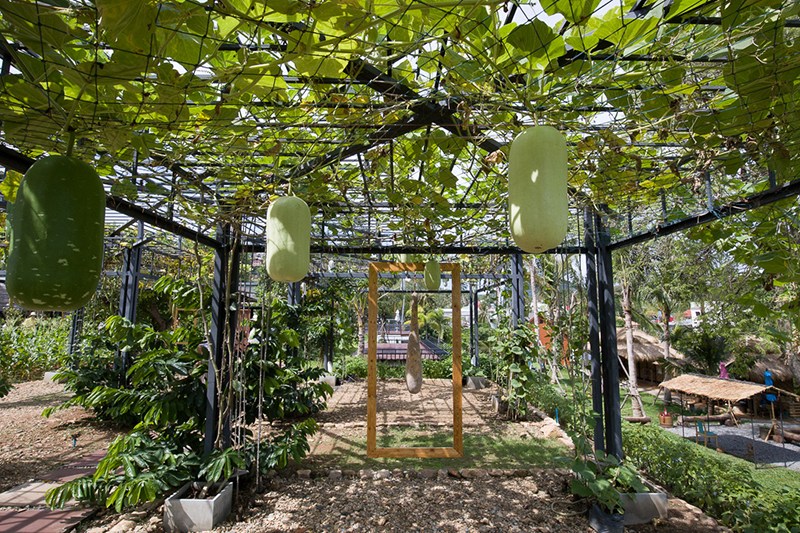 WeGreen’s organic veggie farm was inspired by the owner’s belief that clean and high quality ingredients provide the best nutrition, and the produce grown there is done so with a blend of native wisdom and modern technology. Not surprisingly the onsite restaurant features a menu in which the focus is on fresh and healthy cuisine, the selection of ‘alternative-fusion-food’ dishes and drinks being quite impressive.

These and other sights and sounds to be found around Samui are enough to fill up the odd day or two not spent sunning and frolicking on the beach or by the hotel pool. And being roughly 25 km from top to bottom and a little under the same at its widest point, the island is large enough in size to allow for some decent exploration from attraction to attraction but not too big to deter casual ‘what’s-on-offer-other-than-the-beach’ explorers.

Getting There: Samui can be reached by air and sea, with flights and ferry boat services available daily. Bangkok Airways operates the airport on Samui and flies there from Bangkok and back again multiple times a day, from morning to evening. It also has services to Samui from regional points like Singapore, Guangzhou, Kunming, Hong Kong and Kuala Lumpur, and domestic flights from Phuket, Krabi, Chiang Mai and U-Tapao (Pattaya). Another option is to fly to Surat Thani on the mainland and then take a 90-minute bus ride to the ferry pier from where a 90-minute boat ride is then taken to Samui. Ferries from the mainland to Samui depart regularly throughout the day. It is possible to book transfers to Samui from Bangkok and Surat Thani that include the land and ferry travel.

Paradise Found – 10 Most Beautiful Resorts in Koh Samui & Beyond

Checking In: The extensive accommodation scene on Samui caters to different tastes and budgets and is spread throughout the various beaches. There are spectacular five-star hotels offering opulence and luxury, family resorts tailored to parents and kids on holiday, beach resorts that nestle the coastline, lovely boutique hideaways perfectly suited for couples on a romantic getaway and properties that are more budget-oriented yet typically still offer a great location and decent comfort.