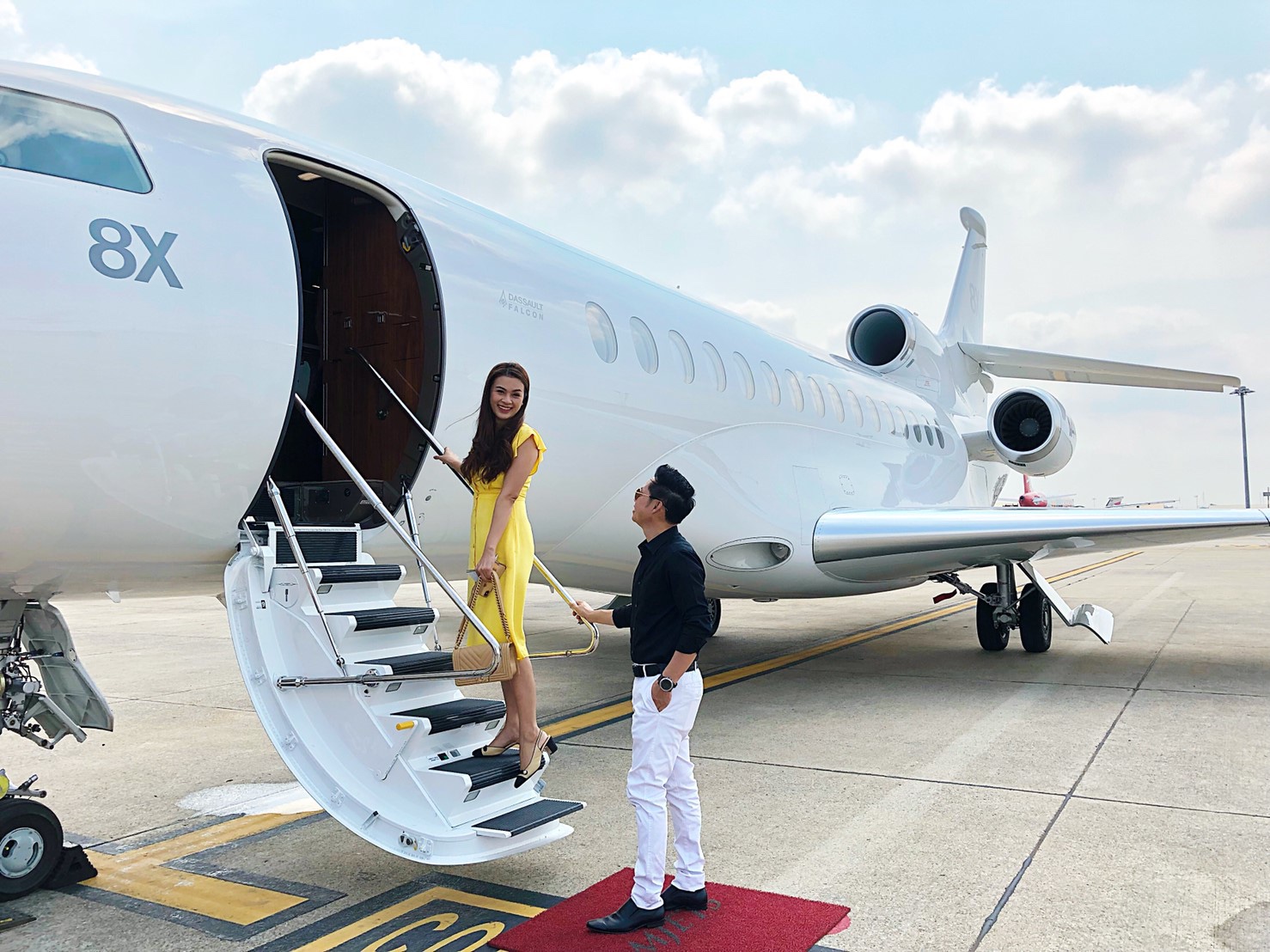 It is amazing how beauty can transcend through aviation and that’s the exactly what I felt during the flight on the latest creation from Dassault, the Falcon 8X. The Dassault Falcon group was gracious enough to prepare a flight for my guests and me.

The trip began with us arriving at 9AM at the MJets terminal in Don Muang International Airport in Bangkok, Thailand. MJets as usual was above and beyond with their facilities and service.

After the formality with snacks and drinks at the MJet lounge, we were then shuttled to the awaiting Falcon 8X parked at the north side of the airport. During the ride to the 8X, we got to see some amazing commercial and business jets parking on the aprons. It was certainly a build up to what’s waiting for us. As my heart and mind racing and building up of expectation for the flight, the 10 minute ride on the Benz Sprinter seems like an hour.

We arrived at the doorstep of the Falcon 8X with its inviting red carpet to the . The massive beauty of the aircraft was simply stunning with its wide shiny wings and its large presence. Besides the beautiful lines of this large aircraft, there were certain characteristics and signature of a Falcon jet.

The very first is the tri-jet engines on the aft section of the aircraft. The tri-jet engine set up is powered by three Pratt & Whitney PW307D engines. This tri-jet signature on the 8X would be similar to Dom Perignon compared to champagne or Bugatti Veyron to a sports car. After nice professional greetings by the crew, Captain Ryan, Captain Jim air stewardess Rita, I was toured with a walk around of this sleek jet.

my pilot instinct kicked in immediately for a aircraft walk around, knowing that we will be departing soon. Captain Ryan was kind enough to allow me to do a walk around with him during this preflight. The walk around was an amazing experience. He explained the elements of this flying beauty and I begun to understand how this flight will be a nice one.

There were many features he pointed out, but one that stood out was the clean large wings. One of the highlights of any Falcon jets is the short field performance. The Falcon 8X can take off and land with payload of passengers, baggage, and fuel in some of the shorter runways in the world. Thanks to the tri-jet engine, which allows for extra performance and certainly the clean wings with their flight controls to assist getting in and out of most airports hassle free.

Once the walk around was completed, we walked up to the airstairs with firm solid feel and two railings for safety. After entering the aircraft I turned right to the first section, which is the galley and crew rest area.

The galley was modern, spacious and a nice European touch. Across from the galley is the large crew rest. These crew quarters is almost two meters in length, which is quite comfortable for any pilot, especially during long flights. Then enter the second section of the aircraft, which is the main seating area.

The first thought that came to my mind was family comfort with the large space of club-seating layout. The cabin theme has a nice beige tone of modern interior with highly crafted finishing.

According to the Falcon team, there are over 31 designs of the cabin layout, which new owners can choose from. And if that’s not enough, the owners can also design to their own specific needs of layout and material selection. The design team can even make a trip to see the client worldwide to help assist these decisions.

Walking towards the back are the two divan sofas, one across from each other. This is by far my favorite area. This third area can be a chit chat area for friends and family or business discussion or just some alone time. A nice area for gazing out over the wings while gliding above over clouds, and counting islands below for this particular flight.

Behind this third section is the lavatory, which is quite comfortable in space and one can even put a shower there as an option. Behind the lavatory is the baggage storage area. The 8X can store up to 19 luggage pieces and guests can access this luggage area any time while on the ground or during flight. This comes in handy in case one forgets their iPad or sunglasses for a selfie.

I stopped by for a quick glance in the cockpit where Captain Jim and co-pilot Captain Ryan were preparing the flight. As the engines begin to spool up, I made my way back to right club seat and ready for departure.

The door closed, three engines started, air conditioner is nice and cool, Bossa Nova music is on, drinks in our hands, safety demonstration by Rita, and we begin to taxi. Taxiing was nice and comfortable. We made a few turns on the taxiway and lined up on 21 left runway. Rita notified us once more for safety checks, all the drinks and loose items were put away and we begin to roll. After about 5 seconds of rolling, nose gear up and we were airborne. I have to say, after flying in various jets, this Falcon 8X has to be one of the quietest I have experienced. According to team, the sound decibel in 8X cabin is about 4.6 decibel, which is amazingly quiet. It is certainly one of the quietest in its class.

As we banked right, slipping through clouds, we were out of Bangkok airspace. We can see Bangkok fading out as we climbed and the city is slowly disappearing through layers of clouds. We were cleared to 40,000 feet or FL400 in pilot terms and we were over the of Thailand. As we begin to level off, Mr. Didier, the Dassault Falcon Regional sales Director kindly offered us Dassault wine from their own vineyard in Bordeaux. Well, needless to say, we did not decline.

The flight was extremely quiet and comfortable. The spacious cabin has of airiness with high ceiling and three sections for around. I spent time talking to Didier and my guests in the club seating section about aviation and in particular about of Dassault company itself.

The flight took just over an hour and we can begin to see the blue Andaman sea with naturally scattered islands as if it was meant to be there. It was just simply breathtaking. We were heading out in this beautiful machine through space and time with lapse of luxury, and we simply left all of our worries behind at home.

We approached the Phuket airport from the north, nice and stable, and smooth landing. The 8X was assigned to park on the edge of the airport. Once parking was complete, Rita opened up the door. The air stairs fully descended and opened, and we can see the MJets team ready to take us to the terminal. It was simply fabulous.

We arrived at Anantara Layan for brunch and greeted by Fred, the GM of the property. It seems like it was scripted but it wasn’t. It was quite spontaneous and just floating in cloud 9.

After a nice and easy brunch on the beach overlooking the Layan beach, we headed back to Phuket airport and prepared our return leg.

The preparation at the airport terminal was uneventful and arrived at the plane in no time. As always, the crew was ready and so were we. After a few short period of selfie and group pictures, door closed, we were cleared for departure. We got our ATC clearance, lined up and airborne southbound heading out towards Andaman Sea. It was simply an amazing flying by the flight crew and also the performance of the Falcon 8X.

On the way back I spent much of the flight time in the aft section on the left sofa cloud gazing. To top it off, the amazing stewardess Rita popped open a nice bottle of bubbly, Dom Perignon to further compliments this amazing experience. It was a sense of serene and calm as I sat there listening to the quietness of the cabin while the guests were sitting in the club seating area.

The beautiful astatic of the interior had all of six senses kicked in while slowly enjoying a glass of bubbly. If I were to summarize in few words it would be fabulously comfortable while knowing I can reach global destinations with this Falcon 8X; for instance non-stop from Bangkok to London, London to Los Angeles, or in this case Phuket to Bangkok.

Well, that completes my trip on the wonderful Falcon 8X. I trust you had a nice glimpse of this amazing Falcon 8X and the opulent flight experience. The Falcon Team and flight crew have been wonderful and the word thank you would certainly not be enough.

Though obviously to fully appreciate Falcon 8X, one must see it and fly it. Until then, safe flying, enjoy your travel, and clear for take off.