13 – 17 April 2022 (Wednesday – Sunday)
13 – 16 April 2023 (Thursday – Sunday)
13 – 17 April 2024 (Saturday – Wednesday)
.
Songkran Festival is an event where boisterous fun and ancient traditions go hand-in-hand. For tourists, the event offers a chance to enjoy a huge celebration where water parties break out in the streets of Thailand’s towns and villages. For locals, it is a time when they can spend precious moments with their families and visit the temples to observe ancient rites and make merit.
. 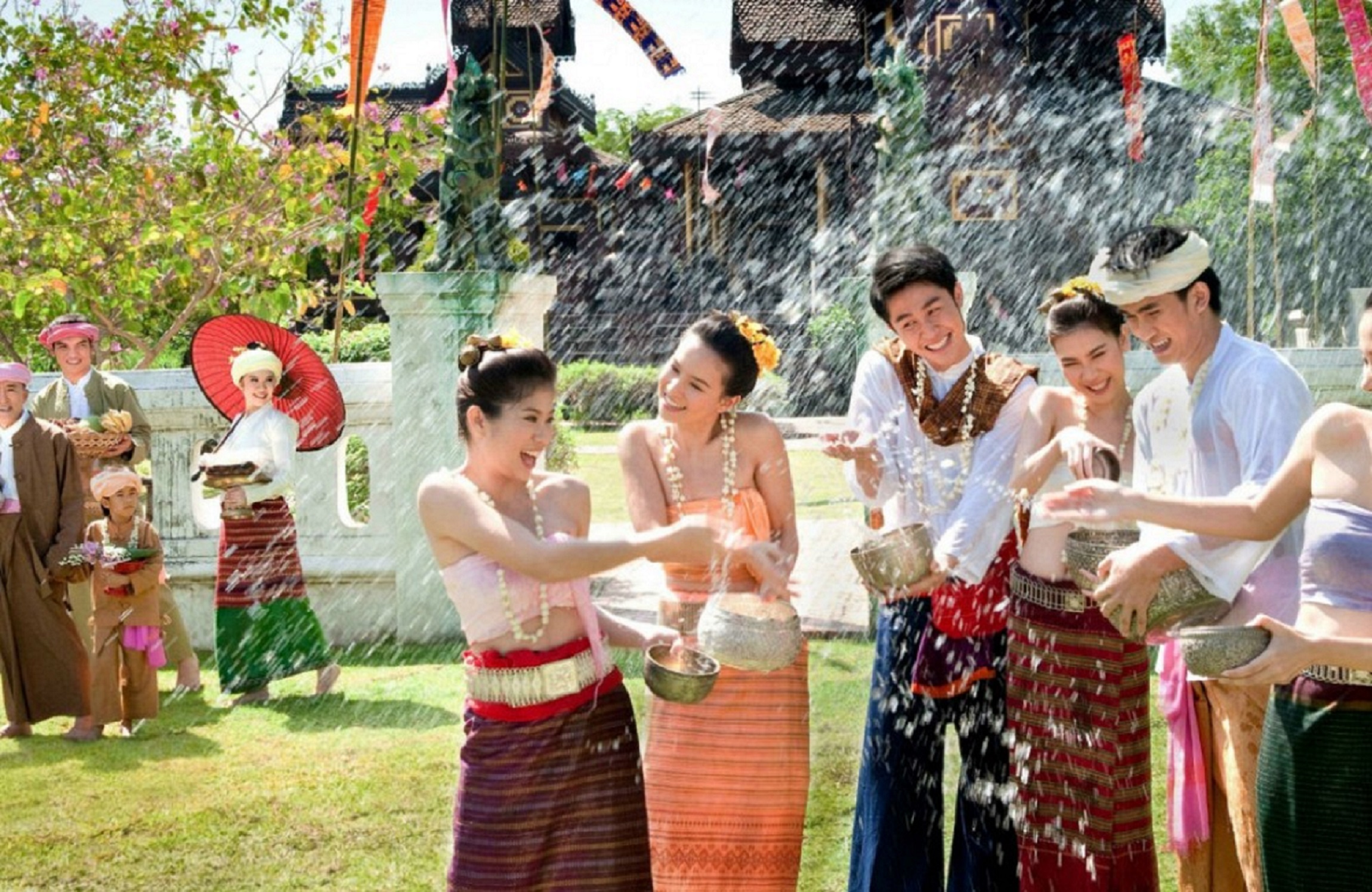 There are some locations that stage unique local festivities a little later. These include in Samut Prakan’s Phra Pradaeng district in the Central Thailand region, where the local Monpeople observe New Year traditions.

In the Na Haeo district of Loei in Northeastern Thailand, locals celebrate the Thai New Year with a procession of flower trees – the only tradition of its kind in the country.

At Wat Thai Wattanaram and Naresuan Maharaj Stadium in Mae Sot district, the event celebrates the time-honoured traditions of the Thai Yai ethic group and the Thai people, with traditional activities including purifying Buddha image, sand pagoda building and colourful parade. Other activities are cultural and music performances, water tunnel display, a folk village, a food fair and local art and craft workshops. 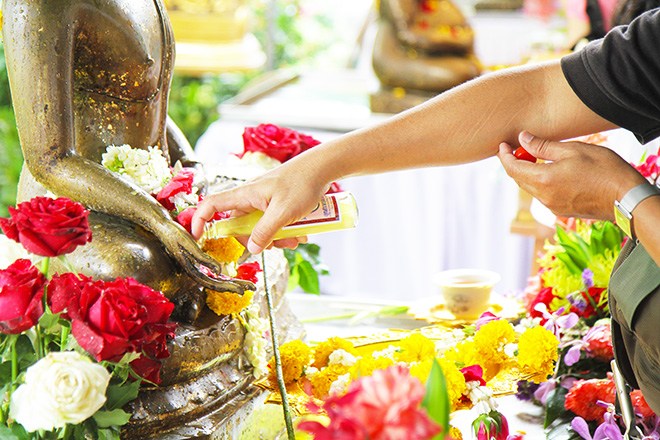 At Hat Manopirom, Wan Yai district, the event is focused on the theme of ‘Cool Isan’ with a water tunnel and displays, an umbrella tunnel, and a five-region sand pagoda zone as well as a ‘Sand Art Contest.’ The opening ceremony and stage performance.

Taking place from 13-15 April at the multi-purpose ground in front of the Mueang Ranong Municipal Office. *More details will be available soon. 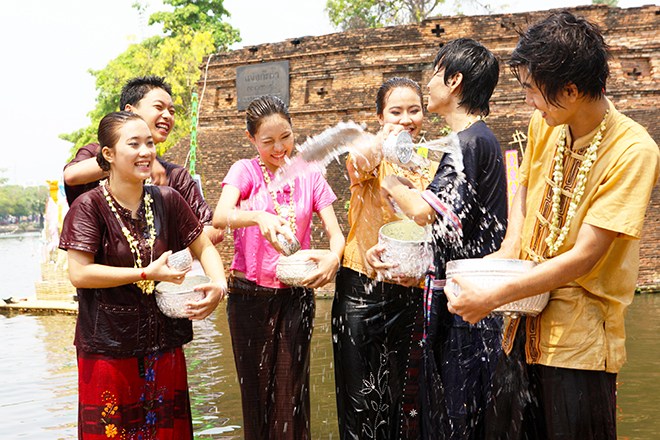 Songkran is a time when family comes first, respect is paid to seniors and people visit the temples to take part in age-old ceremonies. Visitors will get more out of Songkran if they take time to understand its origins and its traditions.

Songkran is, without doubt one of the most popular of Thailand’s many festivals. This sometimes wet and always wonderful holiday is when Thai people travel up-country to be together with loved ones, to visit the local temple and celebrate by enjoying home-cooked dishes. And as Thailand is visited by so many tourists each year, news of Songkran has spread well beyond the borders of the kingdom. Now thousands of people come to take part in what’s become known as The World’s Biggest Water Party.

But the traditions of Songkran are a long way from the images shown in the world’s newspapers every year – powder smeared tourists armed with water pistols and wide grins. The Thai New Year, in its purest form, is a religious festival steeped in Buddhist and Brahman traditions. Marking the end of a 12 month cycle when the sun moves into April and there was traditionally a gap between rice harvesting and planting, Songkran is now held on fixed days, 13-15 April.

Songkran is a time when family comes first, respect is paid to seniors and people visit the temples to take part in age-old ceremonies. So visitors will get more out of Songkran if they take time to understand its origins and its traditions.

That’s why we’ve put together of Songkran tips to help everyone to enjoy this unique slice of Thainess.

Like Christmas in the West and the New Year in China, Songkran in Thailand is when families travel long distances to come together.  And on Songkran Day itself (13 April), Thais visit their local temple to pay respect to the images of the Buddha and seek good luck for the New Year.

The main activity is the pouring of scented water onto the sacred ฺBuddha images of the temple – a ritual called Song Nam Phra. It seems that in past times, lustral water used to clean Buddhist statues was regarded as spiritually cleansing and so collected and gently dripped over family members for luck – called Rod Nam Dam Hua. But thanks to the Thai love of fun and the heat of April, the gentle Rod Nam Dam Hua ceremony developed into the full-on water play we see today. It’s also a great way to cool off in the sun.

You don’t have to visit the temples to carry out this charming tradition of bathing the Buddha images. Many malls and shops put out their own images of the Buddha with a bowl of scented water so that people get the chance to Song Nam Phra wherever they are. Remember, that water is not poured onto the head of the Buddha image, rather onto the torso and body. This water is traditionally scented with a perfume called Nam Ob.

Around Songkran don’t be surprised to see what appear to be large sand castles in the grounds of temples. These are made as a way of replacing the earth taken away throughout the year on the shoes of people coming to pray. These Chedi Sai, as they’re known are often decorated with flags, coloured pebbles and money, and families or groups of friends work together to build them.

But the traditions of Songkran are a long way from the images shown in the world’s newspapers every year – powder smeared tourists armed with water pistols and wide grins. The Thai New Year, in its purest form, is a religious festival steeped in Buddhist and Brahman traditions. Marking the end of a 12 month cycle when the sun moves into April and there was traditionally a gap between rice harvesting and planting, Songkran is now held on fixed days, 13-15 April.

Songkran is a time when family comes first, respect is paid to seniors and people visit the temples to take part in age-old ceremonies. So visitors will get more out of Songkran if they take time to understand its origins and its traditions.

That’s why we’ve put together of Songkran tips to help everyone to enjoy this unique slice of Thainess.

During the Songkran celebrations, many Thai people like to create a little good karma by freeing caged birds or releasing fish into the waterways. Though this takes place nationwide, one of the best places to see this being done or even to take part yourself is at Phra Pradaeng in Samut Prakan Province, where the ceremony has been part of the traditions at Wat Proteket Chettaram, for many decades.

Dos and don’ts of water play

There’s no denying that the chance to play with water pistols and to do battle with happy strangers is half the fun of Songkran for most visitors. But there are still precautions you should take to ensure you enjoy the fun safely and without inconveniencing other people who may not feel like taking part.

The first thing to remember, whether you’re using buckets or water pistols, is to always fill them with clean water. In the most popular areas for Songkran, such as Chiang Mai, and on Sukhumvit Road, Silom Road, and around Khao San Road in Bangkok, the local authorities will supply sources of safe water. Many people like to deliver a bit of a shock by icing the water, and while this adds to the fun, large pieces of ice can be dangerous when thrown, so this practice is best avoided. It is also a good idea to avoid swallowing the water being thrown for hygiene and safety reasons.

Some areas of Thailand have been experiencing drought conditions for the past few years, so people should be careful not to waste water at Songkran. This is why in many parts of the country, Songkran celebrations have been scaled back so that the water play only takes place on one day. You should do your bit to save water and instead try to enjoy some of the many other activities that happen at this time of year.

While this is the hottest time of the year and the Songkran water fun seems the perfect way to cool off, remember that Thailand is still a relatively conservative kingdom. Women should be wary of wearing tight clothes or ones that are light in colour and/or made of thin fabric. When wet, such garments can become quite revealing. It’s not a bad idea to wear a swim suit under your normal clothes to ensure that you don’t show more than you planned.

Prepare for a pasting

It’s not just water being thrown for fun at Songkran, its increasingly common for revellers to be smeared with chalk powder called din sor pong which can act as a sun-block. If you want to join in with the smearing, avoid people’s eyes and make sure that you have permission first, especially if you’re celebrating Songkran with strangers and children. Overenthusiastic powder pasters have faced assault chargers in the past.

Protect yourself and your possessions

It’s safe to say that if you venture outside at Songkran, you’re going to get wet, so take precautions. Keep mobile phones, wallets and cameras safely sealed in plastic bags and if you’re planning an evening out or have business meetings, make sure you have a spare shirt or some clothes to change into. Also remember this is the hottest time of the year and you will need to keep applying sunscreen which is easily washed off with all the water being thrown.

The more chaotic aspects of Songkran are not for everyone. Some people don’t want to join in with the throwing of water and this should be respected. Don’t splash strangers who are clearly trying to stay out of the fray or who are on their way to work. Never splash people on motorcycles, monks or pregnant women and observe the ceasefire that usually starts as the sun goes down when people want to dry off and enjoy evening meals.

Don’t forget to plan ahead if you’re travelling

The whole kingdom is on the move during the Songkran holidays and trains, planes, busses and hotels can be booked up months in advance. So if you’re planning to head upcountry, it’s worth booking transportation and accommodation early, especially if you’re heading to Chiang Mai, where the biggest Songkran parties are held.

Be very, very careful on the roads

The fun and revelry of Songkran holidays can lead to people being less cautious when it comes to safety, especially if they’ve been celebrating with drinks. Be aware that the roads are unsafe at this time of year. If you use a motorcycle, make sure you wear a helmet and don’t ride into areas where water is being thrown. And needless to say, if you’ve had a drink, don’t even think about driving. And for the safety of others, report people who seem to be intoxicated while operating bikes or cars.